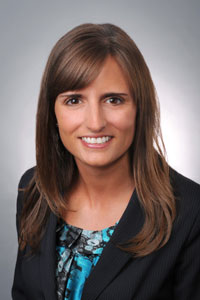 Ashley Marks joined the Hankey Law Office as an associate attorney in 2011. She had worked at the firm for two years prior to this as a law clerk while she finished law school. Her primary practice areas are Long Term Disability, Social Security Disability, Personal Injury, and Wage and Hour.

She attended law school at the Indiana University Robert H. McKinney School of Law, graduating in 2011. Prior to this, she attended Indiana University, where she obtained two undergraduate degrees in English and Philosophy. While in law school, Ashley was extremely active. She was an intern for the Indiana University School of Medicine’s legal department. She also served on the board for the International Moot Court Competition as a problem writer, and was awarded the best overall written brief during the school’s 2010 annual competition. After graduation, Ashley has been recognized as an Advocate by the American Association for Justice in 2012. In 2014, she was named as one of the National Trial Lawyers Top 40 under 40. She has also been named as a Rising Star by Super Lawyers from 2015-2019.

Ashley truly enjoys serving her community and helping others. Professionally, she regularly represents the Hankey Law Office at various events which provide support for individuals living with disabilities. She also speaks at support groups for individuals living with particular disabilities, such as traumatic brain injuries. Personally, she frequently volunteers at her church, Mount Pleasant Christian Church. One of her favorite events to participate in there is Night to Shine, which provides an unforgettable prom experience for individuals dealing with special needs.

In her free time, Ashley enjoys anything that keeps her active. She regularly runs half marathons, including the Indianapolis Half Marathon, the Monumental Marathon, and the 500 Mini Marathon. She also enjoys spending time with her family, cheering on her favorite sports teams (Go Braves, Pacers and Colts), and traveling.